Based on Chapter 17 in East of East: The Making of Greater El Monte and South El Monte Arts Posse’s “East of East” archive.

Photo of Kumezo Hatchimonji in front of Valley Seed Store.

The current landscape and demographics of El Monte reveal only a small fraction of the Japanese American community that, at some point, was one of the region's most thriving communities.

Present-day Valley Mall shares part of its name with a much less famous store, owned by Kumezo Hatchimonji, a first-generation Japanese American in El Monte. Originally located at 402 East Valley Boulevard and in operation for almost ten years (1934-1942), the Valley Seed Company retail store was a symbol of a community’s resilience and history in agriculture. 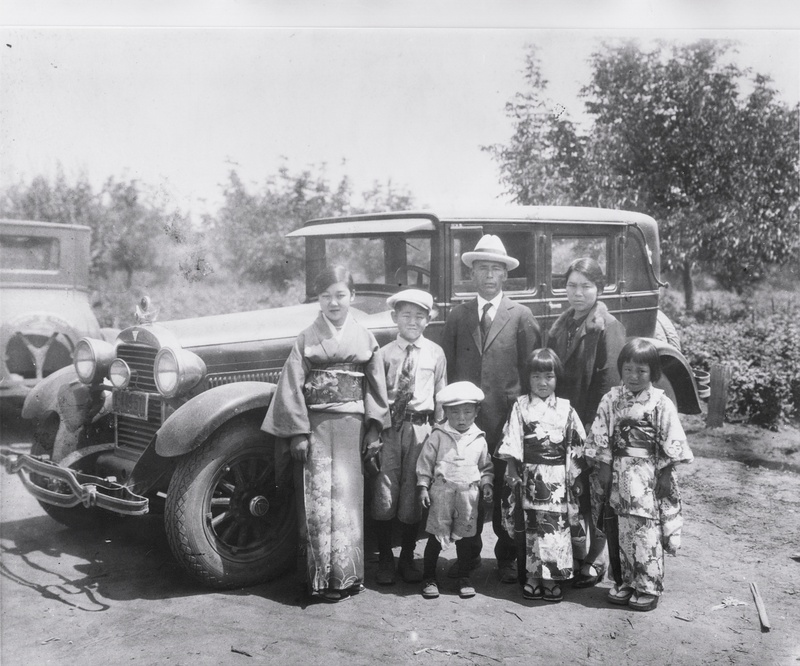 Photograph of the Nishida family, one of the many Japanese families that immigrated to the United States in the early 1910s and settled in Greater El Monte.

Nowadays, the farms that Japanese families managed and worked in after arriving in the United States in the early 1900s are mostly gone. Few of them remain as a lasting symbol of the labor of Nikkei populations, who have made significant contributions to the development of Greater El Monte despite the geographic and socioeconomic forms of segregation they faced. 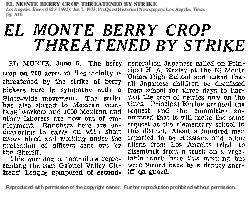 Newspaper article showing that Japanese families requested that their kids were dismissed from school to help in their farms during the Berry Strike of 1933.

But Japanese Americans were not the only ones guaranteeing that fresh produce would get to the tables of other families in California. Many Mexicans worked its fields, and the 1930s marked a time of proximity between the two communities. On one hand, both Mexicans and Japanese kids had to endure segregation in schools and many other public spaces. On the other, their parents occupied different positions in the farming economy, and tensions arose when Mexican farmers working in farms with Japanese managers decided to mobilize and demand better working conditions. 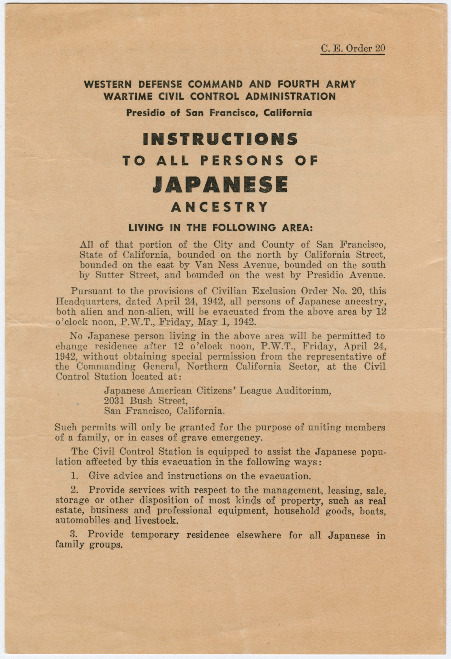 The Civilian Exclusion Order No. 20 pamphlet was posted in several cities on the West Coast. Meeting points were different, but instructions were the same.

Those tensions, however, were replaced by solidarity across different ethnic groups when Executive Order 9066 was signed by President Franklin D. Roosevelt on February 19, 1942. More than 100,000 men, women, and children of Japanese ancestry were evicted from the West Coast of the United States and sent to camps and other confinement sites across the country. During that time of unprecedented hardship, many Japanese families in El Monte trusted their employees, mostly Mexican families, to take care of their property while they were gone, creating an affective bond that has lasted for generations.

In addition to Mexican families, Chief Ernie Salas of the Gabrieleno Band of Mission Indians’ Kizh nation helped the Japanese during the Japanese Internment. You can listen to this oral history from SEMAP’s Japanese Americans Collection:

In this interview, Chief Ernie Salas talks about how his family took care of a nursery while its Japanese owners were taken to an internment camp.

On this tour, we will revisit the important contributions made by the Japanese community to Greater El Monte and the San Gabriel Valley. We will also reveal memories of their connection to the Mexicans that immigrated to California as well as the segregation Japanese Americans faced especially during and after World War II.

As Andre Kobayashi Deckrow reminds us on his chapter of East of East,

“As the members of Japanese Americans who grew up in the San Gabriel valley and of the area’s residents with memories of Japanese American friends and classmates both continue to decrease, so too does the impetus for remembering El Monte's Japanese American history. Yet, now as much as ever, it is important to recognize not only the important contributions that the Nikkei made to the region but also the ease with which a vibrant immigrant community was effectively erased from public memory.”

Note: Special thanks to California History Specialist Kelly C. Wallace of the Los Angeles Public Library for confirming the present day location of where the Valley Seed Company once stood. Kelly looked up the 402 E. Valley Boulevard address in the 1940 El Monte City Directory, and then the 1939 Gillespie’s Guide. She found the 100E and 700E Valley Blvd. blocks, compared them to a current Thomas Bros. map, and found the same stretch of Valley Blvd. blocks, but with different numbering. At some point between the 1940s and today El Monte’s street numbering system changed.