Abstract: This was a somewhat impromptu interview that began when Olga (who was overseeing walk-in oral histories at La Historia) began speaking about her experiences as an educator with me (I had just returned from UCLA, which prompted the discussion, as she worked at UCLA briefly in the late 1960s). While a proper life history with Olga would require many more session, this interview focused on Olga’s experiences as a student, teacher, and educational activist in LA, East LA, and El Monte. We began with her experiences as a student in the schools of East LA, where her mouth was taped shut if she spoke Spanish and her third-grade teacher paraded a colleague’s blonde daughter in front of the class as an emblem of fairy-tale beauty (years later, she met this woman – who became an activism, as did Olga, with Cesar Chavez and the UFW – in Fresno and learned that she had hated being dressed up as goldilocks). She describes herself as a “survivor” of those schools, and believes she was able to endure this trauma because her parents instilled pride in her Mexican/mestizo heritage in her. She attended college at CSU-LA, majoring in Spanish, and became a Spanish teacher in East LA schools by 1962, where other Anglo teachers openly told her they feared for the children of “dumb” Mexican students. As a teacher, she worked Aztec and Mexican history and literature into her teaching, and with her husband, she joined movements for Chicano liberation, including the UFW (see above), the school walkouts/blowouts led by Sal Castro (she had brought a copy of the newest book on this topic with her, and urged me to read it), the moratorium against the Vietnam War (at which she and her children ran from attacking sheriffs), and the student uprisings at UCLA (these led to the creation of programs to admit more African-American and Latino students, for which Olga and her husband worked).
Olga came to Mountain View High School as a Spanish teacher in 1971, though during her interview, the Anglo principal pushed her to repudiate the walk-outs and her husbands’ radicalism (she did not). At Mountain View, she joined a parent group (name on the tape) to demand affirmative action in hiring and the teaching of Mexican/Chicano history, and supported students in founding a chapter of MEChA despite opposition from white administrators and parents (as well as some Mexican-American parents). She eventually became guidance counselor at the school. In 1981, she earned her MA from CSU-LA with a thesis that documented the history of de jure segregation (by the School Board) in El Monte from the 1920s-1940s (a project that required substantial original research and would be valuable if digitized and shared more widely). She noted that the effort to desegregate El Monte’s schools, which culminated not in a lawsuit but protests and testimonials at the Board of Education meeting, predates the Orange County case that is considered the first desegregation case in California, and suggested that communication between barrios and the circuit of agricultural workers in Southern California likely means that the Orange County case was influenced and inspired by events in El Monte.
She spoke also in this interview of her husband’s ascent from Hicks Camp youth to radical activist to mayor of El Monte (laughing when she remembered a younger activist calling him a “good old boy” in the 1990s, and remembered how much she enjoyed being the “first lady” of El Monte. 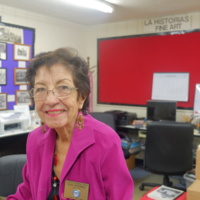