Abstract: The story of Michael Jaime Becerra begins with his family’s Mexican origins and their
migration to LA. His father, a child born out of wedlock, spent his childhood in a small mining
town south of Durango. He spent the first 10 years of his life with other family members while
his mother, Michael’s grandmother, worked hard to make a decent living in the midst of public
shame. At the abandonment of Michael’s grandfather, his grandmother eventually made her way
to America on her own and fought through the process of immigration, calling to her son later to
make his own way by bus in the path she had laid before him. Settling in El Monte, she stressed
an english education upon her family as she worked hard to support them best she could to create
a good life in assimilation. Michael’s father worked many different jobs before and after his
deployment in the Vietnam war. Upon returning he landed a union meat cutting job that led to a
favorable economic condition that Michael remembers most gratefully, comparing it to the more
impoverished situation of those nearby. Michael Becerra conveys the magical peculiarity of
growing up in El Monte, his own unique cultural position within it and the greater experience he
shared with those around him. Possessing the early awareness of wanting to be a writer, Michael
Jaime Becerra became the first in his family to attend college. Struggling through the alienation
of his early college days he eventually fell into his groove with the joining of the writer
workshops on campus. Today Becerra is an accomplished novelist and professor with tenure in
creative writing at UCR the very college he attended. expresses a few of his methods and
purpose behind transforming real experience into that of fiction.
Key Words: List major themes, locations-cities, state, and country, spaces/places within El Monte
and El Monte, Schools, current occupation, 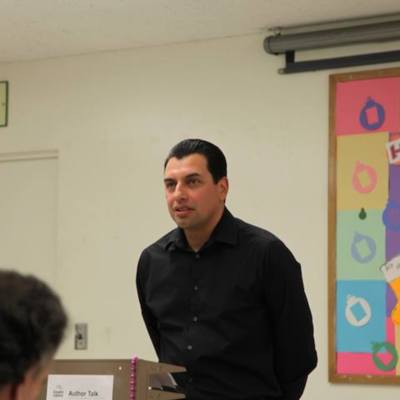 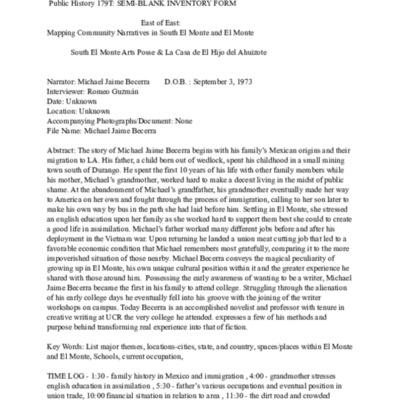 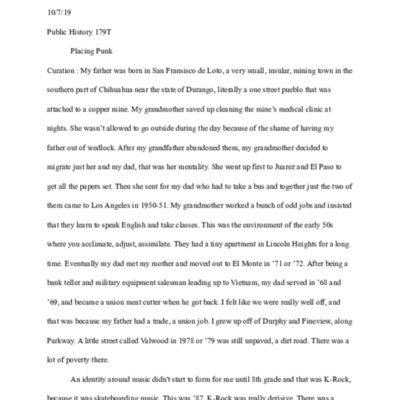