Summary: Eulalia Ramos grew up in Medina Court. After her parents eloped they settled in El Monte, in Medina Court just behind Lady of Guadalupe Church. She recounts growing up in a town that was primarily rural and people worked in the fields. She describes Fr. Cofield who she knew well and Mexican social life in the 1950’s. She discusses Legion Stadium, her father’s strict upbringing, and how she met her husband. She now has many children and grandchildren and lives in Fontana California.

Interview Synopsis:
0:00 Introduction and when she was born. She was born in El Monte. Parents were Elfonso and Eulalia Ramos, from Mazatlán and Chihuahua Mexico. Father eloped with mother and came to United States. Father worked in the Lion Farm in El Monte, and later cement. She is one of 14 children. They came directly to El Monte from Mexico and stayed there all their life. (1920’s?)
3:30 She grew up in Medina Court, on Cofield Street behind Lady of Guadalupe Church. The area was full of fields as there were no buildings. Growing of berries, corn, vegetables. The children did not work growing up, went to catholic school. Her father helped build the church, Fr. Cofield was very involved in the family.
9:00 Went to Arroyo High School. On going to school and subjects she liked. Her father was very strict, she was not allowed out a lot. Description of physical neighborhood, lack of modern amenities, like paved roads, electricity, heat, plumbing, etc. use of pre-fab houses.
13:50 On where people worked, factories, fields. Fields grew walnuts and oranges. On American Legion Stadium and events, there- sports, wrestling, sports. She was into sports, and music, rock and roll, swing. Favorite musician, Jerry Lee Lewis. She would go to dances all the time. On catholic fances and clubs. Fr. Cofield would fundraise at these dances as well.
17:10 On how strict her father was. A lot of rules. She would help Fr Cofield’s efforts, dances in order to get to see boys. She met her husband who was from the same neighborhood, he asked her father before talking to her. They were married in 1960. She had many children- Michael, Debbie, Fredrick, Manuel, martin, Alfonso, Paul, Ann Marie.
21:00 the family never returned to Mexico. The mother would sometimes make trips back to Mexico. The streets in Medina Court were not paved. On celebrations and other events there, in the church. Fr. Gunns replaces Fr. Cofield. On Fr. Cofield’s personality and involvement in the community.
26:00 She moved in 1989 to Fontana, away from El Monte. She had worked for 24 years at Fontana high school. She started working at Columbia school in 1975, as a teacher-assistant. The schools were hiring a lot of people in those days (para-professionals?), but the pay was low. Her husband fixed lawnmowers.
30:00 Her brothers served in the army. One was in Vietnam, another in Korea, and older brothers served in World War II. On how the city has changed over the years. On recent changes to the El Monte area. On white-flight, slow transitions.
34:20 On how she became involved with La Historia, and came to see the South El Monte Arts Posse. On life overall, and her advice to students today. 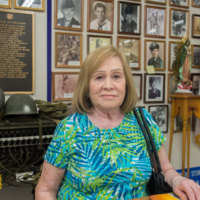 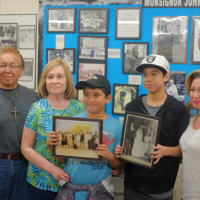