March 5, 10am
In Search of Our Murals:
Community Bike Ride

Adam Goodman, postdoctoral scholar
at USC, will discuss the history of
immigration raids and migrant
resistance at the Sbicca shoe factory.
If you remember this case, please join
us and share your stories.

East of East 2016, Historia de los Monteros is funded by Latino
Americans: 500 Years of History, which has been made
possible through a grant from the National Endowment for
the Humanities and the American Library Association. 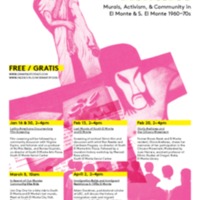