Summary: Ernie Gutierrez has spent a lifetime navigating the politics of El Monte. In this three-part interview he talks about segregation, the school system, problems of discrimination that Mexicans have faced through the generations in the city. He speaks about the history of the area as well as the present, and his work in the 1960’s and 70’s as an activist against the school district, in the Chicano movement, and in city politics, on city council and as mayor. He talks about his own life, growing up in Hicks Camp, his family’s background in Mexico, and his lifelong interest in education and city politics.

Interview Part III:
0:20 On what he would like to see in the future for El Monte. On increasing city identify and pride. On suggestions to make the city more beautiful. That the city has to have trust.
7:40 On current urban redevelopment plans, the building of Walmart, etc.
12:30 On the school district, its organization.
16:00 general thoughts on leadership, on the Mexican President Pena Nieto.
18:00 On Race relations today. Some forms of discrimination, but against the undocumented its worse.
20:00 on general situation among Chicanos today. On vaccinations. On demographic future of Latinos.
27:50 On his name, date of birth, etc. 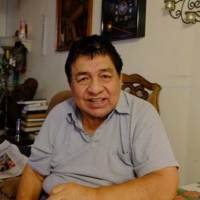