Summary: Born in 1921, Lilian Aparicio still maintains an active life at 93. She was born in Italy and met her husband, Felix Aparicio, during World War II at a dance for American GI’s. He was Mexican-American from EL Paso and while the war kept them apart (and on opposite ends of the world) for many years they were eventually reunited. They married and moved to South El Monte. She described the life she bad in Italy, the rural conditions of life in South El Monte and the changes her life took when she moved here. She travels back to Italy every two years where she enjoys spending the summer at the beach. She raised five children and has been an active participant in the community life of the city since the 1960’s.

0:30 Lilian Aparicio was born in Italy in 1921, she met her husband in wartime. He worked for the (American) Army and had just came from Africa. They met at Pisa, and exchanged photos of their families, and got married in 5 months. He was sent to the Philippines for 5 years. Came back in 1951, and then in 1961 she and her daughter came to settle permanently in the USA.
2:00 At first they lived with his parents. In 1963 they bought a house in South El Monte. It was all farm land, and little new houses.
2:37 after the Gonzalez senior center opened in 1981, she started going every day. Her kids got married, her husband died, and now she lives with her eldest son and her family. She has gone back to Italy to visit a few times.
3:30 Description of Italy and her hometown. They have a home in Pisa, on the beach. Her father was an office worker, mother was homemaker. She has two brothers and one sister, all in Italy. She is 93 years old. Talks about Italy’s experience in World War II.
6:00 On American bombardment of Leverno (SP?) Italy. She went to school, but didn’t work. Loved the beach growing up. Got to travel a lot in Europe, her brother took her on a trip to Germany.
7:30 Met her husband on a dance for the Americans- he already spoke Italian. They talked, her father let them talk- three weeks later he returned- and showed pictures of his family. But after they got engaged (and she pregnant) he got shipped to the Philippines, and then Newfoundland (he had reenlisted with the idea he would be sent to Germany), the couple could not reunite until he left the army in 1951. She stayed in Italy with their daughter and on Christmas Day they came to America.
10:20 She made a cross country train trip from New York, to Chicago, to El Paso (to visit husbands family), to Los Angeles. Daughter did not like South El Monte, said there was nothing but a tree to look at. She went back to Italy and married there.
12:20 Family from El Paso, Felix Aparacio, one of 8 siblings. Her American born children also went into the Army.
13:20 South El Monte was completely rural when they arrived, all cows and farms. And then they started building city buildings. Husband worked in warehouse, in Montebello. He died young, in 1962 however. Her children- Mardalena, Carla, Felix, Steven. They went to South El Monte primary schools and El Monte High School. She belongs to Italian Club and a Latino Club- she goes to museums every week.
16:00 She speaks Italian, Spanish and English. When she met her husband, he could only really speak Spanish. So she learned to speak Spanish. She is an active participant in the South El Monte Senior Center.
17:20 She is Catholic and goes to Nativity Catholic Church. On Valley Lindo School, the church, and a few houses was the entire town. And the large Vegas Ranch. She never worked outside the home.
19:19 she likes to listen to older music, Italian music.
20:15 She never became a US Citizen because after her husband’s death she planned to go to Italy. But her children did not want to leave the US, so she stayed. She has lived in the same house since 1963. She goes visit Italy ever two years, spends 4 months there in the summer on the beach.
21:00 On the differences of moving to a new country- on how her life changed on going to the US. She travelled less after going to the US, but they lived at first in downtown LA, and then moved out to South El Monte.
23:00 Description of South El Monte, physical buildings, streets, etc. on Juan Gonzalez, who built the center. Everyone was Spanish when she loved there, and a few Americans. There is today a large Asian population.
27:00 she likes to go swimming. She later had a boyfriend, who she met at the community center. They were together until he died. 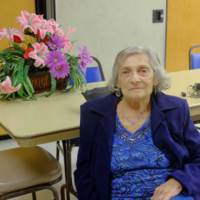