Manuel Martinez and Ofelia Silva, brother and sister who have spent most of their lives in El Monte. They lived in La Mission and have seen events in the LA area from the 1920’s to the present, their lives included World war II, segregation, the Bracero program. They were among the first Mexicans to graduate high school in the city.

0:30 Introduction. Manuel Martinez introduces himself. He was born in Los Angeles. Parents Leonaides Viveros, and Agapito Martinez. Mother from Michoacán, Father was from Irapato, Guanajuato. Grandfather was teacher, he had sharecroppers. He was acting judge of the area, and came because of the Revolution. Father didn’t know much about his family. Father moved to the US with great-grandfather.
4:30 His father worked in the railroads, and in the fields and many odd jobs in Arizona. Niles Arizona? Ended up in Fontana. He worked in railroads, and his uncle also came (San Bernardino) to work on railroads. Lived in a worker’s camp. Parents met when mother’s father bought land in California right across from the labor camp, where father worked.
7:15 Grandfather owned acre of Land in Fontana, a house. Kaiser Steel moved in the 1940’s and built a plant there during the war.
9:30 father worked for Blue Diamond sand and gravel in Los Angeles, family moved to LA. Moved to El Monte in 1939, Mexican settlement, in La Mission.
10:30 He arrived in 1939, he went to Temple School. Father’s company had gravel pit in Irwindale, and there was a brother-in law in the settlement. And that was the reason they came to El Monte. It was rural, no roads, etc
13:00 father built their own house and al the parts needed to make it run. Whole family lived in four rooms. Wood stove, they heat their own water.
15:30 very high water table, they would swim in the river and swam area. His sister was one of the first to go to the new high school in 1939.
17:31 Description of La Mission. Other barrios. (Las Flores, Hicks Camp, Medina Court, etc). Canta Ranas was also by La Mission. Dirt roads, everyone built their own homes. On how old box cars from railroad camps were turned into homes. The wells flowed freely. They grew crops.
24:00 on resistence to letting daughters go to school and traditional values. He learned to play the piano.
25:00 He had a band and they played music throughout the entire neighborhood and beyond.
28:50 the family would all go north to pick in the fields, orchards. Everyone would live in tents and little houses.
29:45 Mexican and Japanese kids all went to school together. They would teach them apart, obsessively because they didn’t know English and had to be taught separately. The Main school was all white, he was the only latino in the band.
31:20 families would all go and work together in the fields picking as a unit, and it was seen as a source of good income. Many familes were on county aid during the Depression.
32:30 father went to Mexico, originally planned to stay there. Oldest sister born in Mexico. Stayed five years there but things didn’t work out and they came back to the US, they came back to Los Angeles. (in the early 1930’s- reference to repatriation?). On his teacher and Christmas celebrations. The family baled hay in Montebello.
37:00 the neighborhood parties started to get larger and larger, and so people from Los Angeles would come out to El Monte for the parties and on holiday. On how you never left your neighborhood if you left to see a girl. Father and Mother married in 1921. 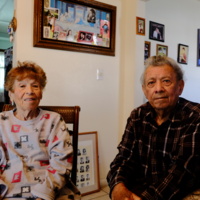 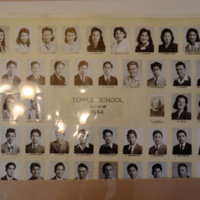