Summary: Donna Crippen is the curator of the El Monte History Museum and has lived in El Monte her whole life. Wife of the former mayor of the city, she raised two daughters while working alongside her husband in their ambulance dispatch company. Born in the 1920’s, she has seen El Monte grow from a small rural town outside of Los Angeles into a major manufacturing suburb. She has been privy to such events as the zoot suit riots, the migrant camps outside the city, the Great Depression, World War II, Legion Stadium, and many more. Despite witnessing firsthand the dangers of auto racing she has been a lifelong car and race fan.

1:00 Donna has lived in El Monte all her life, she was born in Los Angeles and has two sisters and two brothers. Parents came to California from Iowa in 1918.
2:20 On the founding of El Monte and the first settlers.
4:12 Father worked for the Union Pacific railroad,
5:00 More on the history of El Monte’s founding, how the settlers arrived.
6:52 On why the cemetery is in Rosemead instead of El Monte
8:50 She talks about the vigilante group known as the El Monte Boys.
10:00 On attending El Monte High School, her daughters and grandsons also attended
10:37 The El Monte Lion Farm,
10:42 on the Great Depression, the Bodgers Seed Company and the Lion Farm as keeping the city afloat during the depression.
14:10: On attractions to the city, the village mall and the Legion Stadium.
15:45 on whether they were isolated or connected to surrounding cities. She describes a very connected city, with red cars and regional events despite relative geographic isolation. She also describes her summers when her family would rent a beach house and they would invite friends, spending weeks away from parents.
18:00 On what is wrong with today’s youth and society, the breakdown of trust.
19:57 On World War II. Her brothers served in the war, all Navy people, so did her husband. Worked in radio dispatching.
Also a discussion on flooding in El Monte in the 1930’s and 1940’s.
24:25 On her opinion of her generation, especially compared to later generations.
25:53 On her entrance into cadet nursing, and how she met her husband.
30:00 She speaks about a youth camp that her husband was a part of.
32:10 On her remembrance of the zoot suits and pachucos. Says that they were mostly outsiders, not from El Monte.
35:00 on how young people are left to manage on their own today and an exchange student that she hosted.
43:00 On whether there is violence or crime in El Monte.
45:21 on Wiggins Camp
47:00 She talks about the Japanese who used to live in El Monte and what happened to them during the war. Also her opinion of modern racism towards Muslims
50:00 on how she met her husband. And conversation continues with her husbands ambulance service.
53:30 On how her husband managed to built the Senior Center. And then continuing the conversation about the Ambulance Service.
57:30 on the end of the Mexican camps that surrounded El Monte. She mostly thinks it was handled correctly and that there are few residents who have resentment over the camps’ destruction.
A short aside about her experience with Mexicans in Mexico and her daughter having moved to Mexico City.
1:01- On the development of the city and the end of agriculture in the San Gabriel Valley. The death of the walnut trees.
1:04, on her love of car racing.
1:09 on Legion Stadium as a birth place of many musical acts.
1:13 Her husband’s entrance into politics, through the public planning office, more honest than other planners. His service, time as mayor. Building the senior center (continued)
The arrival of malls and the deterioration of small towns.
1:21 her general opinion of El Monte and how it has changed over the decades.
1:24 How she became involved with the El Monte Historical Museum. 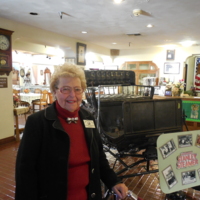