Summary: The brothers Jesus and Ignacio have spent their live times between Mexico and the United States. From Jalisco they were braceros before coming across undocumented and later fixing their papers. Jesus spend most of his life in the Mariachi world of Los Angeles, running a successful band and raising a family in the US. His brother, after coming to the US a few times decided to settle instead in Mexico where he used US technology to build an ice cream business. Now retired they both see their experience in both countries in a positive light.

Jesus.Ignacio.Ylnda.Nunez.wav
0:40 On the early life of Jesus Garcia. He was born in Jalisco, and in 1959 he moved to Tijuana. In 1963 he fixed his papers and from there he moved to LA. He worked in a restaurant and worked in Mariachi.
1:30 On how he got into Mariachi, becoming chief of his band. He has played since he was 14. He worked with a large band, and with many different groups traveling about California and sometimes to other states.
4:36 On life growing up in Jalisco and ranching. He married someone from the ranch after only knowing her a few months, he met her through a friend while singing in the Mariachi.
8:00 He went to the US a few times as a Bracero in his youth.
10:00 description of his wedding.
12:30 a discussion about his songs that he has written. With some singing of the lyrics.
13:30 living in Mexico after being married and working on the ranch and other types of work. They farmed on halfs, they didn’t own any of the land.
16:00 On how he became a bracero through his brother who had already done it. The journey up north and how he gained money and stuff from going north. He would send remittances back to Jalisco.
Jesus.Ignacio.Ylnda.Nunez.Pt2.wav
0:00 on moving to Mexicali and from there to Tijuana. He came to the US when he got papers in 1963, to Anaheim. He worked as an orange picker, and later in a restaurant. He came on a visitors visa, but he worked anyways.
3:00 On how he came to the area, to Rosemead and then to El Monte where he has lived for 18 years now. He worked in various different jobs, he retired from a cardboard company.
6:00 on Mariachi and his favorite types of music and songs. On the types of songs that people would order. A little bit on mariachi trips he took outside of Los Angeles. He had a contract with Pepsi. He eventually sold his mariachi group to someone else and retires.

Ignacio Garcia
15:00 the brother of Jesus, he was born in 1936 in Jalisco.
16:00 he came various times to the US, as a bracero and without papers. He was 25 when he first came. But he never stayed, he preferred to make his life in Mexico. He went to various places in the US, sometimes in short contracts and sometimes in longer ones. He made good money and he sent some of it back to his family.
18:30 His family, he had five children. He moved to the US recently.
19:00 He worked on a ranch in Mexico and after a while he established an ice cream shop in Sinaloa. The technology to make ice cream came from that town, so that now many of the ice cream men of the area come from the town.
21:00 He writes corridos, some that he used to sell and others for himself.
22:00 on how he would enter the US illegally, by himself and other times with friends. Work was easy to find.
25:00 Ylnda talks about how they came to East LA and El Monte. Ylnda sees US and Mexico as forever linked despite efforts to separate them.
26:00 Jesus’ opinion of Mexico and the US. 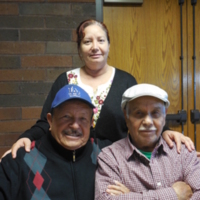