Summary: Felix Ramos has living in El Monte his entire life. Growing up in Hicks Camp in the 1940’s and 50’s he remembers the conditions of the Mexican workers who made their lives there. He was raised by his God-parents who owned a convenience store and restaurant in town, often manning the store himself. Experiencing discrimination at various point in his life he credits Fr. Coefield for encouraging him to succeed and work hard. After a period in the Army where he was stationed in Europe, Mr. Ramos returned to marry his sweetheart and began a long series of jobs that allowed him to educate his children and succeed.

0:30 He was born here in El Monte and raised in Hicks Camps. He mother died when he was six months old of tuberculosis. His Father was in World War II. And he was raised by his Godparents.
2:40 His Godparents had a grocery store in Hicks Camp and he was raised in that area. He also remembers Father Cofield who would help the kids. Description of Hicks Camp and its condition.
4:00 Hicks owned the land and people paid rent for it. Description of his home growing up.
7:00 On his parent’s background. Father from Guadalajara, and mother from unknown location in Mexico.
9:30 His time back in Mexico. He would go for months at a time, and even went to school down there. The Mexican railroads would go through and they would travel to Puebla. He would swim in the hot springs in sulfur water.
18:30 On school discrimination in the US, they didn’t teach him like the Anglo students. He went to Rosemead, and started working there.
20:00 He started to work in the fields, picking fruits and vegetables.
21:00 When he joined the army he learned that he was remedial in reading and math. He thinks the discriminatory school system at the time was to blame. Schools were not segregated at the time. He played clarinet.
24:00 Description of growing up in Hicks Camp, his strict home. The free time and a description of the stores. Braceros would come and eat at a restaurant there. He was fairly self reliant growing up. There are still reunions of people who used to live there. He didn’t visit the other camps growing up.
34:00 On whether he has much communication or interaction with the white people who lived in El Monte.
35:00 One time they tried to rent a house in a white area and people didn’t want to rent to Mexicans. So they had to move to another place that was smaller. Later used GI Bill to buy a house.
41:00 On continuing discrimination, in different situations or certain stores in town. There was still bus segregation at the time.
45:00 Leaving the army in 1956. He was stationed in Spain and sold items in the black market. He got a tattoo to show his love of California. He was a Quartermaster in ordinance.
55:00 On how he met his wife. She was fairly independent and not interested in him at first.
59:00 On discrimination and segregation, it was worse for African Americans in El Monte.
60:00 on Legion Stadium and dancing. The types of bands he liked. There were other events there as well. They used to sneak into the stadium.
1:06 In order to send his kids to private school he often took extra jobs, so that he didn’t have much spare time.
1:08:30 On the jobs he has had. He used to work in the fields. In the grape fields, corn, cotton, prunes. The various companies he has worked for, including a foundry. Has never had too much trouble finding work, worked in many different industries. Eventually retired from El Monte school district.
1:18 His memories of Hicks Camp and Father Coefield. While they were poor they were happy and many got out and became successful because of Fr. Coefield’s efforts. Local churches, one in Hicks Camp and the larger one in Medina Court (Guadalupe), but now goes to Nativity.
1:24 Interaction with Mr Hicks and the end of Hicks Camp. By early 1970’s everyone had to leave. People were compensated and some bought a house. And why didn’t they just improve the area rather than demolish the whole neighborhood in a big redevelopment plan.
1:32 On whether there were pachucos, gangs or criminal activity in the area. He didn’t see it as dangerous.
1:35 On how his Godparents got to Hicks Camp. God-Mother already living there, selling tortillas. Padrino was poor, he was in the Mexican Navy and moved there.
1:37 Start of conversation outside in the garage where he walks through various items from his god-parents’ stores, including various rare objects. 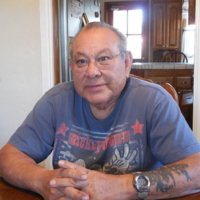 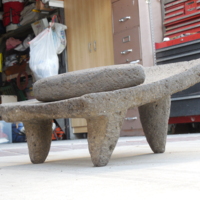