Abstract: Dana’s father (originally from Montana, came to Southern California during WWII) moved his family to South El Monte to a two-acre lot on Potrero south of Rush that housed his business, Ababa Demolition, which employed many Mexican-American laborers as well as African-American laborers from East LA. Dana and his brothers worked hard with the family on the lot, cleaning bricks and other materials carted in from demolition sites for resale, primarily at the Starlie Swapmeet. Dana’s father was a member of the John Birch Society and campaigned for Goldwater, and at the local level pushed for pro-business policies in SEM, while also engaging in civic development and charity work through the Rotary Club and the various award campaigns. Dana’s father and mother were among those who travelled to Washington DC to accepted the Trigg Trophy, and Dana and his family were active in the installation of curbs, gutters and sewers along newly-paved roads in SEM. The “Vargas Ranch” was next door – Joseph Vargas was a leading Mexican-American founder of SEM who hosted annual fiestas to celebrate the founding of the city and Mexican Independence Day and Cinco de Mayo on his property (he is interviewed in the Rio Hondo Collection from 1977).

Dana’s youth was bucolic, and he remembers the area as agricultural but developing (he would go swimming at the Whittier Narrows and his family had ponies and chickens). Mayor Vargas’s wife introduced him to homemade tortillas and Mexican food. He never did well in school, but enjoyed his time there, though he described himself as “very conservative” as a teenager, someone who did not partake in the counterculture of the 1960s. Father became increasingly conservative after the Watts Uprising (he drove into Watts armed to the teeth with his workers to defend and collect his equipment from demolition sites he was working), and Dana mirrored some of that, though today he considers himself center-left. Went into the Army in 1972 and never returned to SEM. 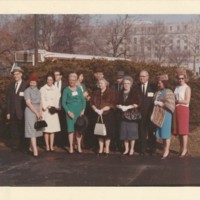 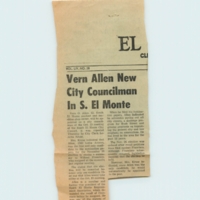